If you’re using Android 10, you can turn on live captions to get real-time captioning for all media—including videos, podcasts, and audio messages. Here’s how:

How to Turn on Live Caption in Android 10

Most of us are familiar with the usefulness of captions—whether they’re helping us understand a movie without disturbing others or giving us a way to enjoy our favorite shows when we can’t use headphones. But did you know that your Android phone has a built-in captioning feature? It’s called Live Caption, and it can caption any audio playing on your device in real time.

Here’s how to turn on Live Caption in Android 10:

First, open your phone’s Settings app.
Next, tap Accessibility.
Then, tap Live Caption.
Toggle the switch to On.

Now, whenever you play media on your device, you’ll see captions automatically appear. You can adjust the look of the captions by tapping the gear icon in the Live Caption main menu. From here, you can change the text size, style, and color, as well as the background color and opacity.

What Is Live Caption In Android 10?

Android 10’s Live Caption feature is an accessibility tool that automatically captionsthe audio of any video or audio playing on your phone. The feature uses Google’s speech-to-text technology to generate real-time captions, which appear as on-screen text.

Live Caption can be useful for people with hearing impairments, or for anyone who wants to watch a video without disturbing others around them. The feature is also handy for watching videos in noisy environments, or when you can’t use headphones.

To turn on Live Caption, go to Settings > Accessibility > Live Caption. You’ll see a toggle switch that you can use to turn the feature on or off.

Once Live Caption is enabled, all videos and audio playing on your phone will be automatically captioned. The captions will appear in a small, scrollable window that appears over the video or audio player.

You can move the caption window around on the screen, and you can also adjust the text size and color to make the captions easier to read.

If you need to edit the captions, you can tap the “Edit” button in the caption window. This will open a full-screen editor where you can make changes to the text.

Live Caption is a great tool for making videos and audio more accessible. However, it’s important to note that the captions are generated automatically, so they may not always be 100% accurate.

Highlights Of The Live Caption:

The Live Caption feature in Android 10 is designed to provide real-time captioning for any media being played on your device. This includes movies, TV shows, podcasts, and even video calls. Here are some of the highlights of this feature: 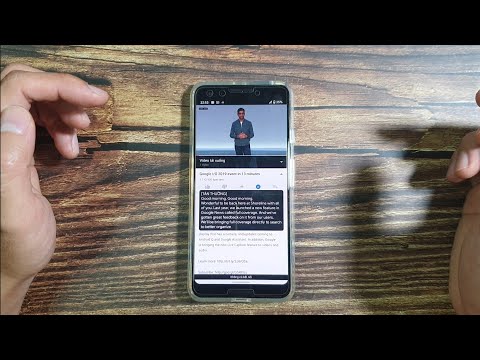 1. Open your phone’s Settings app.
2. Tap Accessibility.
3. Tap Live Caption.
4. Turn on Live Caption.
5. Optional: To change or fine-tune your caption settings, go to Step 3 and tap More settings.
Thanks for reading our guide on how to turn on Live Captions in Android 10. We hope that this guide was helpful and that you were able to successfully enable this feature on your device. If you have any questions or concerns, please feel free to leave us a comment down below.

No comments to show.